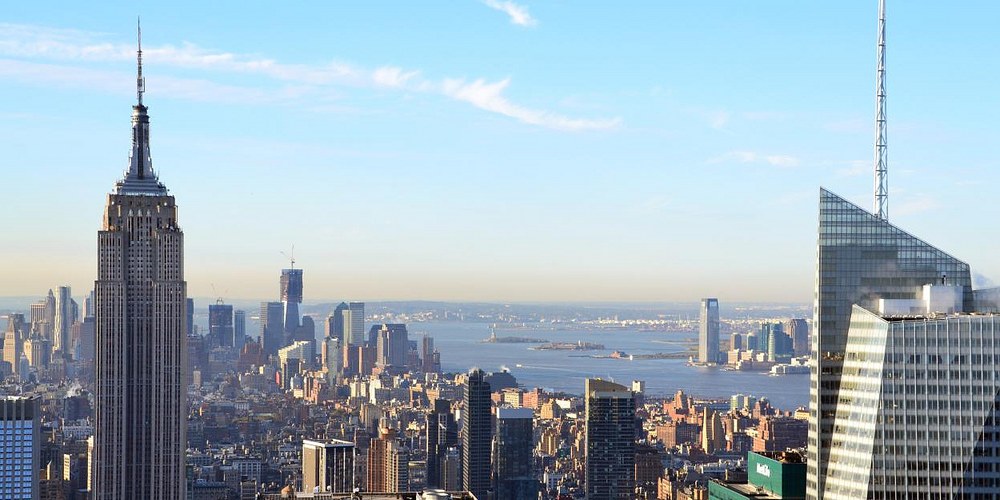 When you have a full seven days to explore the Big Apple then you might not know where to start. So, to get an idea of what’s out there, on the morning of day one head to the Top of The Rock at the Rockefeller Center for a bird’s eye view of the city below. If you haven’t had breakfast yet then afterwards make your way down to Auntie Annes in the Rockefeller Plaza for a hot sour cream and onion pretzel and a strong coffee. Within walking distance are three of New York’s most famous landmarks – St Patrick’s Cathedral, the largest gothic-style cathedral in the U.S, the incredible shopping opportunities of Saks Fifth Avenue and the internationally renowned Museum of Modern Art.

After you’ve had your fill of shopping, browsing and admiring the architecture, turn right onto Sixth Avenue and keep walking until you reach the corner of west 58th street, where you will find the Angela Rock n Roll Deli where the meatball parm is legendary – the perfect place to stop for lunch. In the afternoon, Central Park is your oyster – look out for statues of William Shakespeare and Alice In Wonderland, take a ride on the 19th century Central Park Carousel, or just wander through these 843 acres of urban green. Before you head home for the evening drop in to Monkey Bar and cosy up in a booth, listen to some jazz and sample a shrimp cocktail and a Rohan duck washed down with a classic Monkey Gland cocktail. 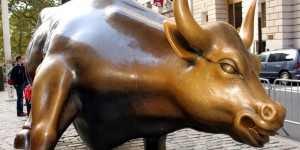 Day two and it’s time to head downtown – start off in Little Italy and breakfast on French toast and coffee at the Landmark Diner before wandering along the Mulberry Strip and drinking in the atmosphere. Alternatively, skip breakfast and eat as you go, trying cannoli, zeppoles, gelato and pizza as it takes your fancy. When you’ve had your fill then cross the few streets over to China Town and visit the Museum of Chinese in the Americas, the Mahayana Buddhist Temple (which houses the largest Buddha in the city) and Canal Street, where the shopping is fantastic value (if lots of fakes…). If you’ve worked up an appetite for lunch then there’s an enormous range of options, from roast duck to noodles – try Grand Sichuan on Canal Street for the widest range of dim sum you’ve ever seen.

After lunch, head west along Canal Street towards the Hudson River until you reach Hudson Street. Follow Hudson Street north and you will come to the famous West Village, home of Bleecker Street where there are a plethora of high end shops and some fabulous drinking establishments such as the White Horse Tavern where Dylan Thomas indulged in his last drinking binge before his death in 1953. For more designer shopping head to the northwest corner of the West Village – the Meatpacking District – and finish your day with dinner at the legendary Pastis.

Day 3 – The Upper West Side

Start your third day in the Big Apple at Alice’s Tea Cup Chapter I with mixed berry crepes or scones benedict. You’re right on the edge of Central Park West here so take a wander along this famous road and look out for historic apartment buildings like The Dakota (where John Lennon and Yoko Ono lived), The San Remo (where Bono, Diane Keaton and Demi Moore live) and the Beresford, which is home to Diana Ross. A few blocks north you will find the city’s oldest museum – the New-York Historical Society and the American Museum of Natural History, with the amazing Hayden Planetarium at the Rose Center for Earth & Space. After a morning of learning, head for a late lunch at H&H Bagels and sample the original New York bagel.

After lunch, make for Riverside Park and see the boats and yachts moored at the 79th Street Boat Basin. Riverside Park stretches right along the Hudson River and is a great, peaceful place in which to spend the rest of the afternoon watching the ships go by. As evening falls, head back towards the Lincoln Center between West 62nd and 65th Streets and Columbus and Amsterdam Avenues, and get tickets for a ballet, opera or concert. Grab a sophisticated Italian bite at the Lincoln Ristorante whilst you marvel at the Henry Moore sculpture and the unique grass roof.

Start your fourth day on the southern most tip of Manhattan island at the point where the country’s immigrants would first have arrived all those years ago – Battery Park. Look out for Castle Clinton, which was built to defend against the British and where you can buy tickets now for Statue of Liberty and Ellis Island tours. Alternatively, hop on the Staten Island Ferry and take the commuter route for some pretty impressive views out over the Statue of Liberty and the whole of Lower Manhattan. At the Staten Island end, jump off for brunch at Beso, a short walk from the ferry terminal on Staten Island, which offers great Spanish fare, and then take a tour of the Staten Island Botanical Garden (Snug Harbor).

Head back to Manhattan and walk north of Battery Park to the triangle shaped Bowling Green, which is the city’s oldest park. On your way pick up a sweet afternoon treat from one of the many delis and sandwich shops that exist to feed the workers of the New York Financial District and sit and eat it in the sun. Once your sugars are up take a trip to the National Museum of the American Indian, which is situated in the impressive Alexander Hamilton U.S. Custom House. Towards the end of the day head for the Stone Street Historic District, where you will find a beautifully restored pocket of 19th century New York, and locate an outdoor table at one of the buzzy restaurants at which to dine under a period streetlamp.

It’s one of the most famous roads in New York history, and the main focus for the city’s financial activity, so start your day on Wall Street. Whether or not you’re wearing the pinstripes and the red tie stop off for breakfast first at the Bread Factory Cafe and then head for the New York Stock Exchange at 11 Wall Street. Although it’s no longer open to the public you can still keep your ears peeled for the opening bell and soak up the atmosphere of traders rushing to their posts from the outside. Pay a visit to the Museum of American Finance, which is in the old Bank of New York building, and learn about America’s financial history and the investments that made the country. For lunch, head to Cipriani on Wall Street, where deals have been made and broken – if you have time stay for an afternoon cocktail on the balcony overlooking Wall Street below.

A ten minute trip in a cab or on the subway will take you to the site of the World Trade Center and the 9/11 Tribute Center and walking tour. From here, take a quiet, contemplative walk to City Hall Park, which is surrounded by some fine examples of 19th century government architecture and is a great place to watch newlyweds, financial workers and judges crossing paths. Finish your day at the nearby Dakota Roadhouse between Church St and West Broadway, where ‘cheeseburger fries’ and draft beers are the order of the day.

Start your day in Soho with breakfast at the Cupping Room Cafe with a simple cinnamon danish or one of their ‘orgy waffles.’ Afterwards, take to the cobblestoned streets and explore the numerous boutiques and chain stores that have given this area the reputation of being something of a mecca for the young and the uber rich. Whilst many of the galleries that were formerly here have moved to Chelsea, the Museum of Comic and Cartoon Art is definitely worth a visit, and there are still some smaller gallery spaces to be found if you look for them. Head south from Canal Street on Church Street until you come to Tribeca with its industrial buildings and Tribeca Cinemas, home to the Tribeca Film Festival – for lunch make your way to the Greenwich Hotel for some slap up sushi at Nobu.

After lunch, take the subway southwest all the way out to Brooklyn – it might seem like a trek but it’s worth it to see this up and coming area with hipster havens like Williamsburg and the legendary Luna Park on Coney Island. Take a walk along the Brooklyn Promenade for some spectacular views of Manhattan, visit the Brooklyn Museum, Brooklyn Children’s Museum and Brooklyn Historical Society and finish your day with a slice of famous Brooklyn pizza in the shadow of the Brooklyn Bridge. 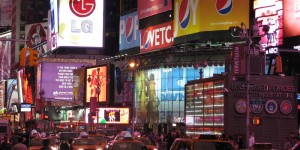 It’s your last day in New York and so time to make sure that you’ve crossed off all the landmark sightseeing spots. Start your day back in Day 2’s Greenwich Village, but this time see its daytime appeal with a breakfast sandwich at Au Bon Pain before making your way to Washington Square Park to see the replica of the Arc de Triomphe and watch the skater kids doing tricks. Head back to Bleecker Street, home to beat poets, folk and jazz musicians, and make like Jack Kerouac by visiting the Caffe Reggio, which used to be his hangout – the place to sit and people watch with an Original Cappuccino. This area feels a little more off the beaten track than the more hectic neighbourhoods with its NYU buildings and a unique village vibe, as well as plenty of great specialist shops selling speciality meats and cheese to browse for lunch.

As your new York trip comes to an end, what better place to visit than the centre of it all – Times Square. Just head north on Seventh Avenue until you reach the cluster of tall builders and flashing neon signs that reaches from West 42nd to West 47th Streets. Look out for that iconic Coca-Cola sign, Chevrolet clock and Planet Hollywood and stop for a second and just take it all in. Pay a visit to Ripley’s Believe It or Not! and be horrified by the “Phantom of the Savanna,” a life size albino giraffe, as well as the pickled tourist and the shrunken head. You’re in the centre of the entertainment district here so book yourself a Broadway show, such as Chicago or Wicked for that quintessential jazz hands experience, and afterwards head to Lattanzi on Restaurant Row and feast on the post-theatre Jewish Roman menu to finish off your trip.

Enter your details below to find out which New York visitor pass would be cheapest for this itinerary. The recommended pass will depend on the ages of those going and whether they are students or seniors. Sometimes it will work out cheaper to just buy individual tickets for each attraction, and if that is the case then that is what will be recommended.